The genesis of the World’s Oldest Rodeo can be traced to the development of early Prescott. Founded in 1864, Prescott grew as miners and cattlemen flocked to the area. The cattlemen capitalized on the area’s remoteness to establish numerous ranches. These ranches attracted cowboys who brought new blood to Prescott and supported the town’s economy. Ranches held biannual roundups (rodeos) during which cowboys engaged in long, arduous work. Afterward, they reveled in comparing their skills. These cowboy contests initially provided opportunities to establish bragging rights on who was the best roper or best bronc rider. Outside spectators and participants alike would root for and bet on their favored competitors.

The cowboy contests at the ranches eventually influenced Prescott’s Independence Day celebration. Shortly after being established, Prescott began holding an annual Independence Day parade. The first rodeo-like activity integrated into the festivities in 1866 was horse racing. By 1888, a committee of townsfolk and businesspeople was formed to expand the event to appeal to a wider audience. The annual festivities included firehose company contests, hard rock drilling contests, and notably, cowboy contests. Cowboy contests were chosen specifically by the committee to capitalize on the popularity of the informal competitions already occurring on local ranches. The first competition was held in what would become Forbing Park and featured events like steer roping and bronc riding. This was the beginning of the world’s oldest rodeo. Juan Leivas won the event and was dubbed “Best Cowboy” and awarded a sterling silver trophy, a bridle, spurs and a saddle. This competition set the criteria for a modern rodeo, as a committee organized and ran the event, cowboys were invited to compete, admission was charged at the event to cover expenses, prizes were awarded to participants and the event was documented.

The annual rodeo born on July 4, 1888, evolved and expanded during the 20th century. In 1913 the event became known as the single “Prescott Frontier Day” while also moving to the present site of the Prescott Fairgrounds. The new venue featured rough terrain, which added to the challenge faced by riders and horses. The name was amended again in 1914 when the event was renamed “Prescott Frontier Days,” reflecting the fact the rodeo was no longer a single-day event. The rodeo once again made history in 1937 when Prescott Frontier Days became the first event of its kind to host an outdoor rodeo at night, with lights, on its 50th anniversary. In 1976 to celebrate the nation’s bicentennial year, the rodeo held a grand display of patriotism with festivities spanning July 2, 3, 4 and 5. The 1980’s saw Prescott Frontier Days establish new milestones. On August 6, 1985, the rodeo was officially recognized as the “World’s Oldest Rodeo” and it celebrated its 100th year of operation in 1988.

Prescott Frontier Days has run consecutively every year since its origin in 1888. The rodeo wasn’t canceled during either World War I or World War II, despite the dire circumstances facing the nation. Running the rodeo was particularly challenging during World War II, as the committee worried attendance would be low because of gas rationing and because most male competitors would potentially be fighting in the war. Yet the rodeo persisted, holding fast to tradition. The rodeo even operated during the 2020 Covid-19 pandemic at 25% capacity while adhering to guidelines to ensure the safety of attendees and contestants. Prescott Frontier Days is a true testament to the spirit of the old west which provides a living history of rodeo culture and western heritage that has endured from 1888 to the present day.

“Days Past” is a collaborative project of the Sharlot Hall Museum and the Prescott Corral of Westerners International (www.prescottcorral.org). This and other Days Past articles are also available at archives.sharlothallmuseum.org/articles/days-past-articles/1 The public is encouraged to submit proposed articles and inquiries to dayspast@sharlothallmuseum.org. Please contact SHM Research Center reference desk at 928-277-2003, or via email at archivesrequest@sharlothallmuseum.org for information or assistance with photo requests.

Daniel Rogers, a long-time resident of Prescott, has been involved in the Prescott Rodeo most of his life. He currently serves as the manager of the Prescott Frontier Days, Inc. archives. Come learn about the history and demographics of one of Prescott’s longest running institutions when Mr. Rogers presents a free lecture on “Prescott Frontier Days: History of the World’s Oldest Rodeo” on Saturday, July 23, 2022, at 2 PM in the auditorium of the Fred W. Veil Education Center. Reservations are required. The lecture is currently full, but there is a wait list available. If interested, call Admissions at 928-277-2000. 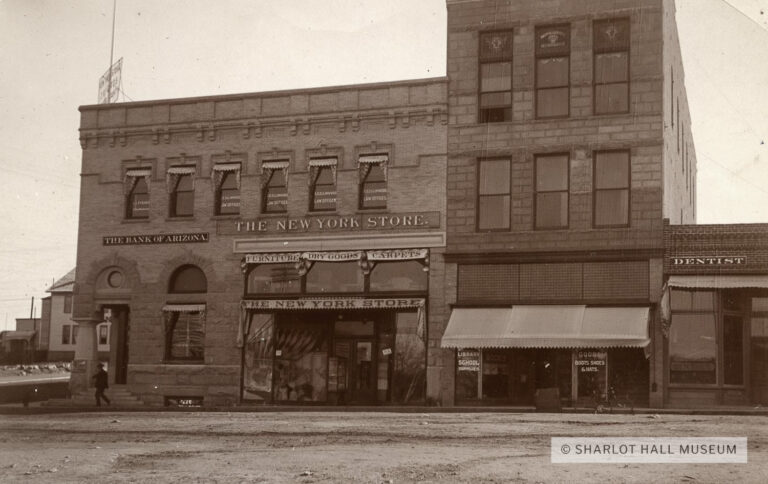